ykadminFebruary 13, 2017events 2017
How could we resist a food outing? One of our February group outings was yum cha at Preston Gold Leaf on 12 Feb 2017 to celebrate the Lunar New Year. We ended up occupying three massive tables shared by Yellowkitties and the GAP boys. Needless to say, the place was packed on a Sunday so thankfully, we had a reservation. It felt good to walk in and head straight for the food rather than waiting in a queue.
Our table wasted no time in taking any dishes that arrived from the carts. We had our usual laughter and chats at the top of our voices. It was great to catch up with familiar and new faces. B had his multiple go at getting what-looked-like a very slippery mushroom using his chopsticks. In the end, he opted for the most “glam” and practical tool – his fingers! **He’s going to kill me when he next sees me** I had a go at pig’s stomach, which I probably wouldn’t have picked if not because I thought it was a piece of chicken. It tasted alright; there’s always going to be a first!
At the end of the day, it was probably less of the festivity and food, but more of the precious company and friendships. Fantastic event with massive turnout, thanks to P and B for organising it for us. We look forward to our next event at Michelle’s – boardgames, snacks and more laughter! 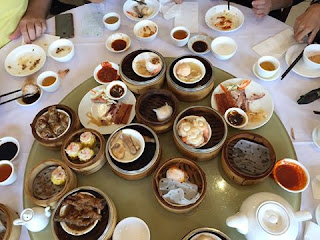